Amusement Expo in Las Vegas Has Many Attractions

Walking through the crowded show floor of the 2018 Amusement Expo, which was held February 27 through March 1 in Las Vegas, the most obvious sight was lots of smiles. It could have been because the amusement industry is just inherently fun, or it might have been because the attendees were delighted to have the show back in Las Vegas, which is also inherently fun. Either way, 2018 attendance was up at the Amusement Expo, with thousands of people on hand for a wide range of educational classes and to see the very latest in FEC and operator products. 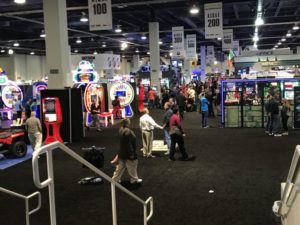 Co-sponsored by the AAMA (American Amusement Machine Association) and the AOMA (Amusement & Music Operators Association), the Amusement Expo has long been a networking and educational opportunity for operators of family entertainment centers and coin-op machine businesses. Theoretically a barometer for the state of the industry in general, the show was very well attended, with busy aisles and lots of informational opportunities. As reported by W.T. Glasgow, overall show attendance was up 25% from 2017; and attendance of registered buyers was up 52%.

Pete Gustafson, Executive Vice President of the AAMA, reported that the 2018 Amusement Expo was enhanced by the addition of a special track for the virtual reality (VR) community, including six VR educational tracks. When it was still in the planning stages, AAMA’s goal for the show was to positively affect the experience and outcome of the show. Gustafson said that “buyers are hungry for education,” and that is exactly what was provided, with 25 separate tracks on Tuesday’s Expo Education Day.  Class topics ranged from “Strategic Vision for Location-Based VR” to “The Art of Merchandising” to “Secrets of the Demand Creators.”

Commenting that the structure for many trade shows hasn’t changed since the 1980s, Amusement Expo organizers provided a newly designed show website, where exhibitors were able to complete registration and make booth choices on a real-time floor plan. Also introduced for 2018 was a new Amusement Expo mobile app, featuring an interactive floor plan, exhibitor list, schedule of events, shuttle bus schedule and more.  Using the app, it was possible to select exhibits to visit and have the show floor mapped out to each of them. 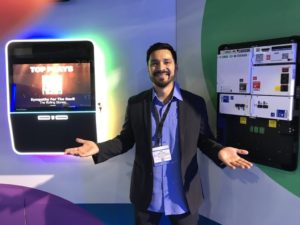 It wouldn’t seem right to mention the awards without highlighting the Angelina Jukebox, the product that won an “Innovator” award for TouchTunes. The Angelina was so named in honor of a young girl, Angelina, who lost her battle with Synovial Sarcoma in 2015 at the age of 10. Angelina had always loved to help other kids, and during her difficult medical challenges, music was what both comforted and motivated her. Kudos to TouchTunes for selecting such a worthy name for their latest and greatest version of the jukebox.

Other new products on display at the Amusement Expo included “Squiggle,” Bay Tek’s delightful novelty ball drop machine, which has a nice vertical presence, moves quickly, and has a progressive bonus and a celebration at the end of the game.

Embed/Helix Leisure, with an updated Emone card reader and revenue payment system, reported that the Amusement Expo looked to be a very good show for them and the staff in their booth were certainly busy. Marisa Garris of Embed reported that they have systems installed in over 1,700 locations around the world, with over 1,200 in the U.S. 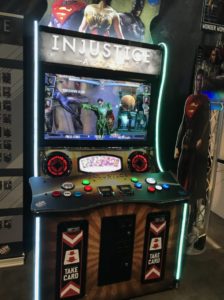 Brian Murphy of Betson said that their new video game, “Injustice,” has been their most popular product, although their interactive Snowboarder game was certainly in high demand.

Zydexo, according to Fred Ivey and Alex Mithani, has found success in combining slot games and interactive skill games. Ivey and Mithani said that their new “Majestic Gardens” touchscreen game has been very well received.

The Amusement Expo is not just about putting buyers and sellers together once a year. The sponsoring organizations are also impressive in the charity work that has been established. AOMA’s Wayne E. Hesch Scholarship Fund helps a college student each year from each state in the U.S. (that has at least one qualified candidate). AAMA’s charity foundation sponsors a large annual scholarship and several children’s charities, including the Children’s Miracle Network. 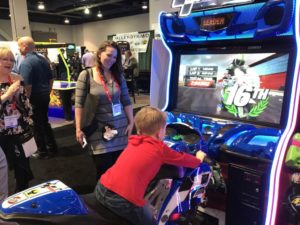 So how was the show, really? Let’s find out from the buyer/attendees. Jerry, a coin-op route operator with 160 locations, said, “The Amusement Expo is the best place for games. It only takes one good idea from someone to make a huge difference in my business.”  Jim, an FEC owner, said, “This is the only show I go to for games and redemption pieces.”