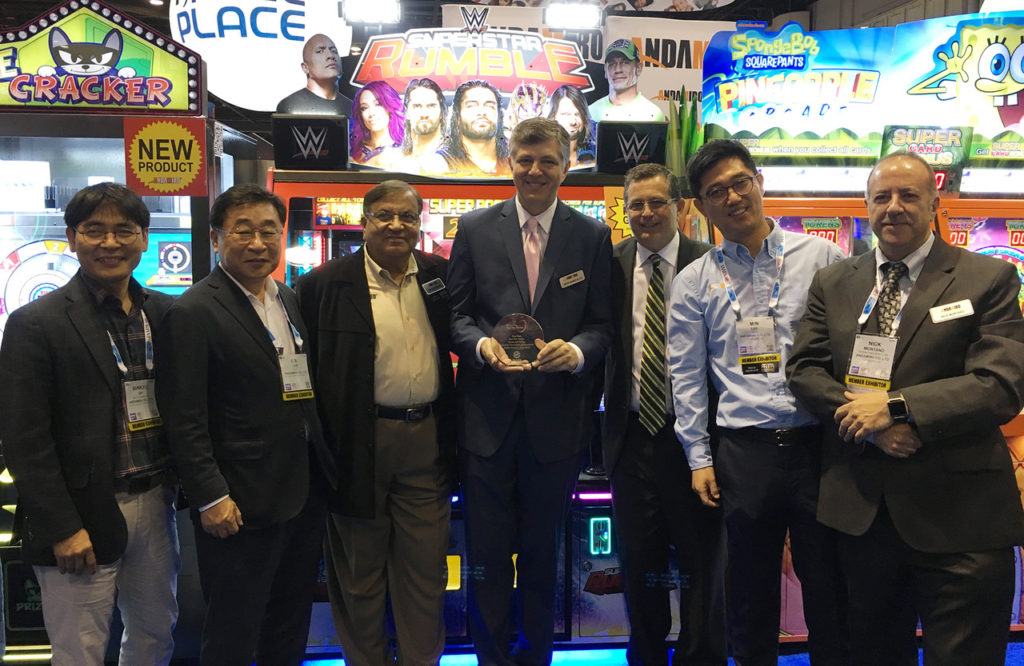 Like the most agile of professional wrestlers diving from the top rope to win a championship match, Andamiro’s newest arcade game has taken a leap toward superstardom with WWE Superstar Rumble. The ticket redemption machine, for family entertainment centres and game rooms, grabbed the first place Brass Ring for Best New Arcade Product during last week’s IAAPA Attractions Expo in Orlando, FL.

The annual Brass Ring program, produced by the International Association of Amusement Parks and Attractions, recognizes manufacturers of games and attractions, as well as amusement parks, entertainment centres and other types of facilities around the world, for excellence in food and beverage services, games and retail, human resources, live performances, marketing and exhibits. IAAPA’s awards committee presented first place honours to Andamiro on Tuesday, Nov. 13, at the company’s booth, where two WWE Superstar Rumble games were on display. Sega Amusements International received second place honours.

The award-winning WWE Superstar Rumble made its official debut at this year’s IAAPA Attractions Expo and will begin shipping to operators in early December. Andamiro’s new game features dynamic lights and sounds, rapid interactive gameplay and multiple win opportunities – all under the moniker of the world’s biggest sports entertainment brand. Players fire steel balls at target holes on a back-and-forth moving championship WWE belt. Players advance up the ladder when they pass through a target hole and win a card if they reach the top; miss the target and the ball redirects to a peg-clad playfield where tickets are won.

In deciding on the best new game, judges considered its innovation, quality and benefit to the operator. WWE Superstar Rumble possesses many attributes that make it innovative. These include a collectible card set featuring The Rock, John Cena, Sasha Banks, Bayley, Finn Balor, Roman Reigns, Undertaker and AJ Styles; and it is also the first game to bring World Wrestling Entertainment content to redemption, the dominant amusement machine category.

The game (no, not Triple H) is manufactured in state-of-the-art factories in Seoul, South Korea; its sturdy cabinet design and intuitive setup and diagnostics make it a winner with operators, while its attractive and lively graphics (inside and outside) will stand out in any gameroom. To be sure, the benefits are in the trademark and the game itself. WWE Superstar Rumble allows operators to capitalize on WWE’s superior brand position that appeals to a wide demographic and to give their customers a gratifying redemption experience.

“This is Andamiro’s first Brass Ring Award, so it is very special,” said Drew Maniscalco, Andamiro USA’s president of sales and marketing. “Our designers were able to capture the excitement of a WWE event and put it into an arcade redemption game. We worked very closely with WWE on this project and they were thrilled to hear the news about our winning IAAPA’s Brass Ring.”

The tradition of a brass ring, a term that IAAPA has made synonymous with achievement, dates back to the late 1800s. Rings were suspended above carousel riders – low enough for them to grasp, but high enough to present a challenge; riders who grabbed brass rings often won prizes, including free rides on the carousel. Most rings were made of iron, but a few were made of brass — which was considered a valuable reward. IAAPA’s Brass Ring Awards venerate the former custom by celebrating achievements of the global attractions industry. They are considered the most prestigious professional honours in the amusement industry.