Cineplex has announced plans to build a new location of The Rec Room at Seasons of Tuxedo in Winnipeg, Manitoba. Described as a “social playground for grown-ups”, The Rec Room will span 40,000 square-foot and combine amusements, gaming, and dining experiences.

“When people think of Cineplex they typically think of our film exhibition business, but I’m excited to show the Winnipeg community that we’re about more than movies,” said Ellis Jacob, Cineplex president and CEO. “The Rec Room leverages our industry-leading entertainment, amusement gaming, food & beverage, digital media and operational capabilities that combined will bring an entirely new, technology-enhanced destination to the city.” 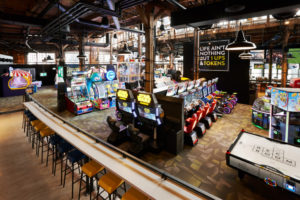 The Red Room, located in south-west Winnipeg, will function as a gathering spot for families and young adults, as well as host corporate events and parties. Built with the support of North American Development Group/Centrecorp as part of its multi-million-dollar development project, the new location will include cuisine and snacks, a bar area, private dining rooms, and an attractions area with over 110 amusements on offer. Credits are tracked via RFID wristbands and can be redeemed at a redemption store for prizes.

Other games on offer include air hockey, pool, and ping pong, and there are plans to include VR experiences, luxury bowling, and axe throwing.

The Rec Room is expected to open in late 2019, and Cineplex mean to open 10-15 more new locations over the coming years.